Hotel Theranda has the pleasure to share with you the good news of receiving Certificate of Excellence 2016 on TripAdvisor, reflecting the consistently great reviews that our hotel has earned on TripAdvisor. This is the fourth time that Theranda receives such recognition from Trip Advisor, the world's largest travel site. We are very happy for that and we will continue working on to gain happy customers and at the end great reviews and prizes TripAdvisor.
We will absolutely frame now the certificate from Trip Advisor which will be displayed at our reception among other certificates. 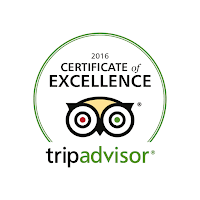 The Certificate of Excellence award provides top performing establishments around the world the recognition they deserve, based on feedback from those who matter most – their customers.

The prices that Hotel Theranda has received on platforms:

4. Theranda Hotel is welcomed into TripAdvisor 'Hall of Fame' 2015

7. Hotel Theranda is ranked on 5 place on TripAdvisor April 2016